← Go Back
Lake of the Woods Golf Course in Mahomet

Lake of the Woods Golf Course in Mahomet, Illinois, is a challenging and fun Robert Bruce Harris layout with family-friendly facilities, including a sporty par-3 course. http://www.golfthelake.com 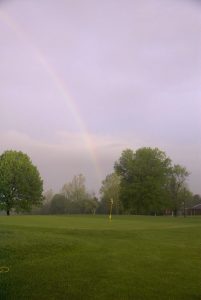 Follow the rainbow to birdie at Lake of the woods.

East central Illinois is flat. The best sledding hill in nearby Champaign is the speed-bump in the Wal-Mart parking lot. So you can imagine what the golf courses in the Champaign-Urbana area look like. One notable exception is Lake of the Woods Golf Course in Mahomet, Ill. This municipal layout is part of the Forest Preserve District of Champaign County, so it not only has trees and – gasp! – hills, but also boasts green fees around $30.

Mahomet lies just twelve minutes away from the University of Illinois campus, and it comes as a welcome surprise to discover that here in the Sangamon River basin, there are indeed some rolling hills, mature stands of hardwood, and natural water hazards. All of these unexpected topographical features converge at Lake of the Woods, where golfers find tee shots over water, elevated greens, and tree-lined fairways. In fact, aside from a renovation program in 1998, the essential character of the classic Robert Bruce Harris design has changed little since it opened in 1950.

Harris, whose course credits include The Playboy Club at Lake Geneva, Wisconsin, designed numerous municipal courses in the 50s and 60s. One of the prerequisites for layouts at the time was ease of maintenance. As such, greenside bunkers at such courses – including Lake of the Woods – were set well back from the greens to allow regular mowers through.

From the tips, Lake of the Woods only measures 6,520 yards, with a rating of 70.6 and a slope of 120. According to Dave Huber, recently retired Head Pro, if you drive around the course and look at the scorecard, you would think that the course record would be in the low 60s. But the best tournament score is just 67. “For some reason,” he says and laughs, “no one can ever quite completely tame it. And the kids these days are all hitting the par-5s in two.”

There are a few keys to “The Lake’s” defenses. One is a number of misleading sight lines off the tee. For example, as you stand at the tee box on the 426-yard 11th, it looks for all the world like you should aim at the fairway bunkers to the left. But because the fairway turns right about 160 yards from the green, the real aiming point is the large sycamore straight out, or even right of it. Anything right – which looks like death from the tee – is golden.

The second key defense is the rather innocuous appearance of some of the holes. Take for example the 425-yard 1st. Easily half of the first-time players here will lose their tee ball to the right, where, unbeknownst to them, there lies a pond that juts further toward the fairway than appearances would suggest.

The third key is the green complexes, which, like some of the holes, appear tame at first. After you go over one or two of them, though, you realize that Robert Bruce Harris, true to early-twentieth century traditions, wanted to be sure that players who don’t stay below the hole are penalized. Case in point, the picturesque 175-yard 14th hole. Huber’s advice here is simply, “Take whatever club you know you cannot hit over and play to center of the green. If you go over, you’re looking at a hard bogey.”

There is also a fine collection of risk-reward short par 4s and 5s. The No. 1 handicap hole is the 528-yard 3rd, where two ponds choke the approach down to a tenuous ribbon of turf just in front of the green. The lay-up is awkward, the long shot is dangerous. I cannot count the number of times I’ve screwed up a simple lay-up on this hole, or, having navigated the lay-up, chucked or pulled my 3rd into one of the ponds.

In short, Lake of the Woods is dollar for dollar and shot for shot the best bargain in the Champaign-Urbana area, even if conditions can be rough at times. The bunkers are a constant source of vexation for regulars, who generally agree to rake themselves a decent lie in the sometimes-hardpan, sometimes-fluffy traps. Heck, sometimes we just drop out behind the traps and hit from there. The long-term plan is to redo them all, but so far, only a few do not draw side-eye from most players. Add to the 18-hole course the adjacent par-3 course ($9) – the only one in the area – and the fishing, camping, and hiking available in the park, and you’ve got yourself a bona fide family vacation spot. Also available are a recently improved driving range and  practice greens, a fully stocked pro shop, and a snack bar. The new pro (and State Champion High School Boys Golf Coach), David Sebestik and his staff provide lessons and club-fitting as well.

The 15th green at Lake of the Woods is a tempting target…but the pond in front calls for prudence most of the time. 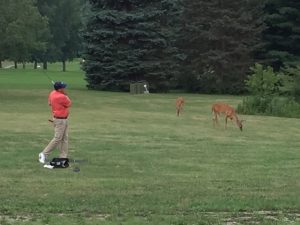 Most rounds at Lake of the Woods include galleries of deer, who get surprisingly judgy about bad shots.