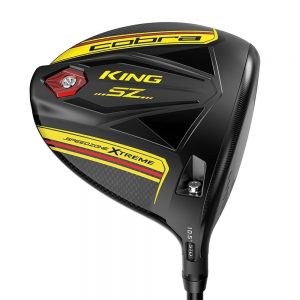 Over six years after I reviewed my first Cobra Golf driver (the Bio Cell line), Cobra has continued to improve all facets of their driver engineering, from aesthetics to feel to power.

Press releases for Cobra’s SpeedZone drivers, new for 2020, tout six different performance “zones” which they claim are based on design features of the world’s best sports cars. I’m not totally sure what that is supposed to mean, but these zones are listed as Power Zone, Strength Zone,  Light Zone, Low CG Zone, Aero Zone, and Stability Zone.

That is, indeed, quite a lot of zones. Conspicuously lacking is the namesake “Speed Zone.” But never mind that now. As they say, “the proof is in the pounding.” (Well, no one has said that before now. If you like it, it’s mine. If you don’t, forget you read it here.)

Golf Magazine’s Clubtest 2020 spotlighted the tour-model King SpeedZone ($450) and the SpeedZone Xtreme ($449),  focusing on one specific aspect in which both of them performed better than the competition: ball speed. Specifically, when tested with the swing robot, off-center strikes retained more ball speed than any other driver, displaying nearly no decrement on to-hits compared to center strikes.

When I took the King SpeedZone Xtreme—which is the model geared toward average golfers—out to the practice tee, the feel was what stood out to me first. In particular, the feel was incredibly solid and the sound was remarkable consistent. One thing I really liked about my current driver (at the time) was how well I could tell where I’d struck the ball with it – toe, heel, low, high, center all felt and sounded (and behaved) very distinctly. The King SpeedZone, on the other hand, felt practically the same no matter where I made contact with the ball, and the sound barely fluctuated, either.

So, the question is: do you consider this a good or bad trait? At first, I wasn’t sure. My contact is pretty inconsistent, so the feedback I get from sound and feel help me figure out what my swing flaw du jour is. The SpeedZone Xtreme is SO solid, the differences in sound, feel, and distance are extremely subtle. During my first couple of rounds with it, this sort of threw me off a little.

After playing it six rounds though, I have learned the minute differences between a slight toe-hit and a slightly thin strike. And when I do find the sweetspot, it feels like a perfect hammer strike driving a nail in with one swing. I cannot recall any driver I’ve tested (close to 100) that has felt more rock-solid heel to toe, crown to sole.

What does this solid feel get you, distance-wise? My best swings are rewarded with distances as long or slightly longer than any driver I’ve tested. Honestly though, improvement in overall distance on “good swings” is not dramatic. This said, however, distance on off-center contact—which, much to my chagrin, is a large percentage of my swings—is considerably improved. Where before I’d occasionally toe-hook my driver 200 yards, now even those ugly shots consistently end up 20 yards farther than before. My less tragically awful “bad” swings produce even better results.

The SpeedZone Xtreme has just one extra tungsten weight (compared to two in the SpeedZone), deep in the sole, and it comes in 9.0, 10.5, and 12.0 degree base lofts, with each of these lofts adjustable +/- 1.5 degrees and in draw, fade, or standard bias. My 10.5 degree standard loft really launches the ball high, even when I tee it down a bit. The 458-cc clubhead sets up beautifully behind the ball, without any hint of feeling “oversized” (which it isn’t, but some drivers just look bulkier than others; this one’s sleek). Finally, the stock 60g HZRDOUS Smoke shaft is a powerful, consistent, low-spin engine driving the power.

I thought I had found a driver last year that would be in my bag for many seasons to come. Well, I was wrong. The King SpeedZone Xtreme is my new go-to, especially on those days when I’m not sure what kind of contact the next swing will deliver (which is, frankly, most days). It’s nice to know that even poor contact will not be penalized as much, and mistakes off the tee will generally be minimized.

The 2020 King SpeedZone Drivers (along with all King SpeedZone irons, fairway woods, and hybrids) include COBRA CONNECT™ Powered by Arccos, the award-winning smart golf system that helps players of all skill levels make smarter, data-driven decisions. Electronically enabled sensors are embedded into the grip, automatically recording the distance and accuracy of every shot so golfers can track performance round-to-round and use analysis to improve practice sessions. Golfers also have access to Arccos Caddie, which utilizes Artificial Intelligence to make better on-course decisions for lower scores.