← Go Back
How Golf Can Save a City: Harbor Shores in Benton Harbor Michigan

The idyllic Lake Michigan shoreline town of Benton Harbor, Michigan–just 2 hours northeast of Chicago–became a major industrial site during WWII, when hometown Whirlpool and other manufacturers were enlisted by FDR to make parts for fighter planes. In the 1950s and 1960s, these same companies produced many of the home appliances and auto parts that fueled America’s post-war boom.

Then came the 1970s: companies moved their production overseas, over 6,000 well-paying jobs disappeared from Benton Harbor in an 18-month period, and the city’s population dropped from 30,000 to 16,000 within a decade. The exiting companies and people left behind mountains of trash and vast fields of toxic waste. According to Joshua Doxtator, PGA Professional and General Manager of Harbor Shores, the Paw Paw River, which meanders through Benton Harbor and Harbor Shores Golf Club, “was so overgrown and clogged with garbage, you couldn’t even see it from the air. You would have never known it was there.” Today, there are kayak and paddleboard rentals on the river, and a hundred species of birds.

What triggered this revitalization of the land and the area in general? The simple answer is “golf.” 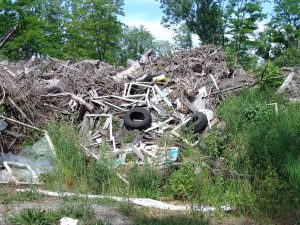 This is what Harbor Shores looked like before the land was reclaimed for a golf course.

“Where am I supposed to build a course?”

Aside from the windblown linksland of Scotland some 800 years ago, golf doesn’t just happen. (Even 800 years ago, golf had help from sheep and bored shepherds.) And a championship-caliber golf course doesn’t just emerge from the sludge of a toxic wasteland without a lot of work and help from the greatest golfer of all time. Jack Nicklaus was brought in in the early 2000s to take a look at the site where a group of local community leaders hoped a world-class golf course would anchor an entire city’s revitalization.

“Where am I supposed to build a course?” said Nicklaus the first time he was shown the site. The Golden Bear’s reaction was understandable. “All the land from the clubhouse through the first green was an auto wrecking yard,” Doxtator says as we putted out on Hole 1. Holes 4 and 5 were a dumping site for a company that made automobile brakes. Holes 14 and 15 were a former Superfund site once occupied by a company that used radium and mercury to manufacture components for fighter planes. Near every tee box today, you’ll find photos of what the land there looked like pre-golf – the transformation is miraculous. 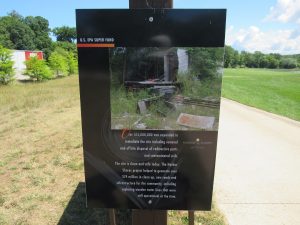 Signs near every tee box remind golfers what the land used to look like.

Thanks to Herculean engineering and vision—and a $500 million investment—the 6,852-yard, par-71 championship golf course today runs across four remarkably diverse and beautiful terrains including a photogenic setting along the coastal dunes of Lake Michigan. Holes 1-6 occupy an inland terrain with occasional appearances by the now-pristine Paw Paw River. Holes 7, 8, and 9 wind along a dramatic exposed dunes-scape with panoramic views of Lake Michigan, especially on the devilish 7th green. Holes 10 through 13 play through woodlands, rolling hills, and ravines. To close, Holes 14 through 18 return to the Paw Paw River, Ox Creek, and its wetlands. It’s like playing through the best terrains Michigan golf has to offer, all in one round.

Michigan has some of the greatest golf terrain anywhere in the U.S., with more exellent affordable and accessible courses than any other state. But you would be hard-pressed to find any course, even in the embarrassment of golf riches that is Michigan, with 18 more memorable holes. There is not one hole in the entire Nicklaus design that resembles any other hole on the course. No wonder Jack has called it one of his 18 all-time favorite projects. (Speaking of Jack, as you head from the half-way house to the 10th tee, take a peek over the edge of the wooden bridge—you might spy another Jack, a gigantic snapping turtle. If you do, know that he LOVES hot dogs but doesn’t care much for bread. So share accordingly.) 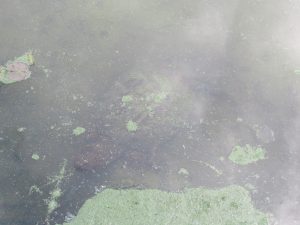 Jack, the snapping turtle. Share a bit of hot dog at the turn. 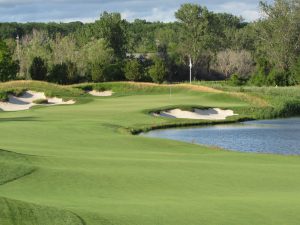 The notoriety of hosting a Champions Tour major comes at a cost, however. “We suffer from the misconception that we’re private,” explains Doxtator. Indeed, the first-class practice facilities, fully stocked pro shop (check out the barware for sale, btw), the cuisine at Jack’s Place, and the absolutely pristine conditions all do belie the daily fee nature of Harbor Shores. The greens fees, on the other hand, suggest a luxurious experience, ranging from $90 during shoulder seasons up to $175 during peak season. One option is the $375 Score at the Shore, which gets you one day of unlimited golf and unlimited food and beverage.

Given the difficulty of Harbor Shores, and the value of local knowledge in navigating the labyrinthine routing through wetlands, woods, and neighborhoods, that all-day option might just be the best deal in town. Despite being only 6,734 yards from the championship tees, the par-71 course rates a whopping 73.6 and has a slope rating of 146 (and maybe the longest stretches of wooden bridge cartpaths on Michigan). Fortunately, there are six sets of tees or combined tees. But even the 6,159 gold tees present perhaps the most difficult challenge I’ve faced on any course in several years.

What, exactly, makes Harbor Shores so difficult? Imagine a hybrid of Harbor Town Links (where Phil Mickelson won the 2021 PGA), with water and wetlands on basically every hole, combined with Northern Michigan-style woods and elevation changes, all woven together by Jack Nicklaus, whose courses always rank as some of the most difficult in the nation.

“This is a second-shot course,” said Doxtator as we began our round. “Distance off the tee isn’t critical on most holes.” My son and I found this to be very true; however, we also quickly found out that if our tee shots were slightly off line on many holes, they were either unplayable or lost. Even on the relatively benign 318-yard 3rd hole, any careless swing could bring the Paw Paw River, which runs from tee to green down the left side, into play. 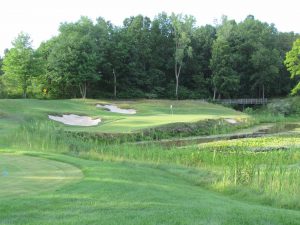 Water lurks everywhere at Harbor Shores, even on the 137-yard 11th, the easiest and shortest hole on the course.

Doxtator’s admonition to attend carefully to second shots was well founded, as the green complexes are some of the most dramatic you will find. The 430-yard 7th hole is perhaps the most picturesque. Here, a necessarily big drive must hug both water and sand on the right in order to keep as far away as possible from fescue-covered dunes that tower on the left and obstruct the view to a dramatically elevated green. Said green is not nearly as deep as it appears from below in the fairway, as it drops off down to a Lake Michigan beach immediately past the putting surface. However, when and if you finally successfully summit the dune to putt, you’re treated with a stunning view of Lake Michigan. The 7th Hole was one of three holes carved off from a state park for the course. Residents weren’t thrilled about this and sued, but the Michigan Supreme Court finally ruled in favor of Harbor Shores. 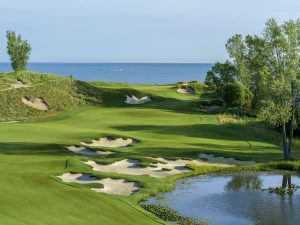 As splendid as the 7th green is, it isn’t the most famous. During the 2016 Senior PGA, Johnny Miller was critical of the green at the 530-yard 10th hole. To be fair, this green is perhaps the most dramatic I’ve ever seen: it’s got two tiers and the upper tier is about 7 feet higher than the lower tier, with a veritable ski-slope between them. Miller was standing on the bottom tier and proclaimed, “You can’t putt this. There’s no way to putt it.” Nicklaus took offense and asked, “You want me to show you how to putt it?” So Jack trundled town the slope, tossed down a ball, barely set his feet, and smacked his putt up the slope and into the hole, some 60 feet away. The crowd went crazy. You can see the video here for yourself — it truly is one of the most amazing alpha-male moments in golf. 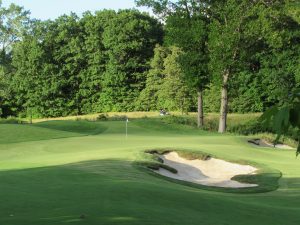 As luck (or lack thereof) would have it, my son had the exact same putt. Unlike Jack’s, his ball did not crest the incline, and as a result, it rolled back past him and off the front of the green. I told him how fun it was to have been able to try the famous putt himself, but he was not as impressed by the moment as I. 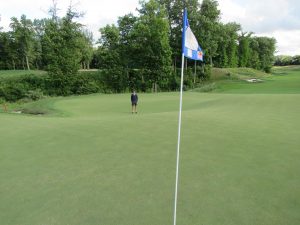 My son, Erik, standing where Jack made the putt in 2016, and where Erik himself would miss the same putt the next day.

The Inn at Harbor Shores

Opened in 2010, The Inn at Harbor Shores is a 92-room luxury hotel on the St. Joseph River that features 14 luxury suites, two top-floor condominiums, and a rooftop meeting space. The Inn offers a selection of dining options (including Plank’s Tavern on the Water, Torch & Tapas, and Rise & Vine), a full-service spa, indoor and outdoor pools, fitness center, state-of-the-art meeting rooms, and wedding venues for up to 300 guests. Next to the Inn, guests and locals may enjoy a 100-slip deep-water marina that can accommodate boats up to 90 feet long; sport fishing charters are available here for a real surf-n-turf experience. The rooms are luxurious and appointed with every fine detail. As for the dining fare, both my son and I highly recommend the Wagyu beef burger at Plank’s – without question the most delicious burger we’ve ever tasted. Nearby downtown St. Joseph boasts a charming business district full of eateries, art galleries, and gift shops. 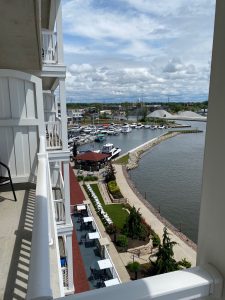 The view from our room at The Inn at Harbor Shores, looking toward the marina.

Between the championship golf course and the luxury resort and spa, Harbor Shores has pulled Benton Harbor out of the abyss. The photos on each hole of what the property once looked like emphatically drive home the dramatic transformation of the land. The sculptures at each tee box commemorating all 18 of Nicklaus’s major wins (including US Amateurs) convey the deep sense of pride in the course’s partnership with the greatest of all time. Harbor Shores deserves mention in any list of “Best Of” in a state brimming with spectacular golf. Any golfer who plays it will immediately remember nearly every hole, as well as the numerous balls they probably lost. Harbor Shores is no pushover, for sure, but neither is Benton Harbor – thanks to golf, the city is fighting its way back. 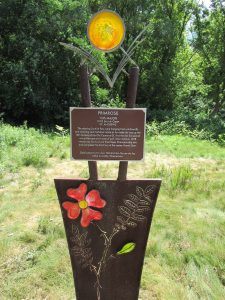 Signs and sculptures commemorate each fo Jack Nicklaus’s 18 majors (including 4 US Amateur titles). 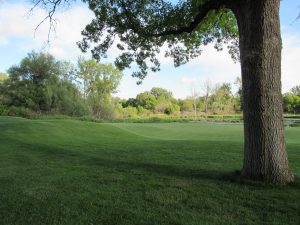 The 6th greeen at Harbor Shores. It is hard to believe that this land was once toxic.